Hàng Bạc (old quarter) is one of Thăng Long’s oldest streets, dating from the 13th century. For centuries, it has been the center for gold, silver and money exchange, although it is now crowded with tourist cafes and craft shops. In the reign of Lê Thánh Tông (1460-1497), the Minister of Interior, Lưu Xuân Tín, received imperial permission to bring metal workers from his village, Trấu Khê, and to set up a silver ingot factory at No. 58 Hàng Bạc (now a travel agent). At first they cast ingots, later coins. The Upper Tren Communal House at Nos. 50-58 served as a school for training apprentice silversmiths. The Lower Kim Ngon Communal House at Nos. 42-48, (still a community meeting room with a bust of Hồ Chí Minh), was the foundry where molten silver was poured into moulds.

Later, when merchants needed large amounts of money – and metal coins or bars were too heavy – an exchange of Hàng Bạc would be arranged. The gold and silver dealers of Hàng Bạc were therefore, the forerunners of bankers. Even today, the word for paper money is bạc, meaning “paper silver” and occasionally, the jewelers of Hàng Bạc still change money (dollars in bills preferably of large denomination).

In the eighteenth century, the street attracted jewelry designers from upper Định Công Village, south of Hà Nội. Three brothers, the patron spirits of jewelry marks in Việt Nam, learned their trade in China in the 6th century. A locked temple dedicated to them is tucked away at No. 84 Hàng Bồ Street, the western extension of Hàng Bạc (a friendly lady tells me to come back at 8 PM).

Hàng Bạc had its share of stories and eccentrics. Miss Bé Tí, who lived in Hàng Bạc, was always called “the little girl from Hàng Bạc”, although in reality she was a very fat lady. She runs a money brokerage, but people came from afar to see her “zoo”: a four-legged chicken, a pig with two mouths and a couple of deformed dwarves. Hàng Bạc was also the setting for a short story, Mèo Lửa, from Vũ trung tùy bút (Collection Written on Rainy Days) by Phạm Đình Hổ (1768-1839). In the story: 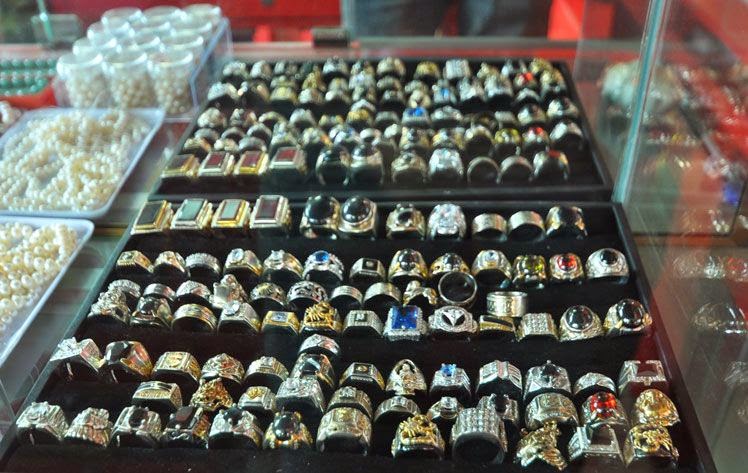 The palanquin of a great mandarin’s wife made a noisy entry into Đông Lạc Guild. The palanquin, preceded and followed by a swarm of lackeys and guards, had blinds made of painted jackdaw’s wings. The entourage stopped in front of the goldsmith’s shop, the servants were ordered to negotiate to buy several dozen silver taels (a measure of weight in those days). Hardly was the haggling finished when the Lady, who remained in her palanquin, told an old servant to take ten tales to palace so that her husband could give his advice on the price. The goldsmith suspected nothing amiss in this. An instant later, without warning, the entire retinue, including the two carrier guards disappeared. At sundown, as the old servant had not brought back the ten taels of silver, the goldsmith went to the palanquin to reclaim his property. Upon opening the blinds, enthroned inside he found only a dazed old blind beggar woman in a red crepe tunic. Investigations into the matter were inconclusive. The old dilapidated palanquin was worth no more than a few coins.

The Golden Bell Theater at the corner of Hàng Bạc and Đinh Liệt (where it joins Tạ Hiền), was built in 1920 by a Chinese merchant for performances of cải lương (renovated opera) musical theatre, which employs elements, which employs elements of both Vietnamese traditional opera (tuồng) and folk opera (chèo). A relatively modern theatrical form first created in the South in the 19th century, the farcical over-drawn characters of cải lương make the plots very easy to follow without knowing a word of vietnam travel and the music, even to the Western ear, can be quite entrancing.

It was on the steps of this theater on January 14, 1937, during the war against the French that the Hà Nội Guards, a unit of the anti-French resistance force, swore “to fight to the death”. Their headquarters at No. 86 Hàng Bạc (now a craft shop), then and in the thirties, was the home of Chấn Hưng, the largest goldsmith shop on the street. Sadly, beneath the ornate crest and once elegant balconies, it is now difficult to tell which, the ochre or the rust-red, is the peeling paint and the façade.

Hà Nội Ancient Quarter Management Department in its Hà Nội 2010 Project is busy restoring old buildings. No. 47 Hàng Bạc and Nos. 97-99 (at the corner of Hà Tiên, opposite the Cải Lương Theater), are scheduled for the renovation./.